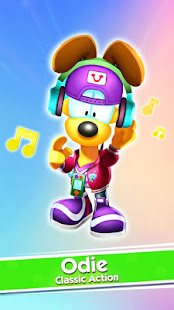 Description: Garfield Rush is an endless running mobile game where the Player is Garfield, Odie or Nemo.After being tricked by a conniving cat named Harry, the player chases after him. As they run, they grab gold coins out of the air while simultaneously dodging collisions with vehicles and other objects, and can also jump on the top of the vehicles to look forshortcuts.

The player can collect various items such as coins, score, elastic shoes, jetpacks, magnets and booster packs. By swapping rapidly as speed increases, more coins and score can be acquired. 18 costumes can be unlocked via in-game purchases and players can collect specific items. Plus characters can pig out on lasagna, spaghetti, Neapolitan pizza, hot dogs, burritos, fried chicken and more!

Level of feeding system
📎Players need to collect a variety of ingredients to cook food, such as lasagna, spaghetti, Neapolitan pizza, hot dogs, burritos, fried chicken and so on.
📎By feeding to upgrade the level. The level is related to the score multiple, the higher multiple, the easier to get high score🏃.
📎Players can unlock new scenes when they reach the level 5, 10and 15.

Waiting for you to collect cool characters
📎Unlock Garfield, Odie, Nemo and other classic characters.
📎Collect character fragments while running to unlock various suits.
📎The specific action of each suit or character is unique in design

Join the most daring rush game!